We are looking back on a very successful CARIM Day 2022 with excellent scientific lectures from our recent laureates, a glimpse in the future of CARIMs stem cell strategies, lessons from nature from our Robert Reneman lecturer Prof. Peter Stenvinkel and last but not least, the CARIM awards & prizes.

Magnetic Resonance Imaging (MRI) is an non invasive imaging technique, which allows to depict anatomy functions and metabolism. We have a 7T Bruker Biospec scanner, equipped with three gradient systems. For large animals (rabbits) we normally use the BGA20 system. For small animals (mice) we use the smallest gradient system (BGA6s). The BGA 12 is used for medium sized animals (rats). It is also possible to measure phantoms or ex-vivo tissue. The MRI scanner is equipped with a variety of radio frequency coils, for MR imaging as wel as spectroscopy (1H 19F and 31P). The system is open for internal and external users. Dedicated imaging and spectroscopy solutions for your research question can be implemented. 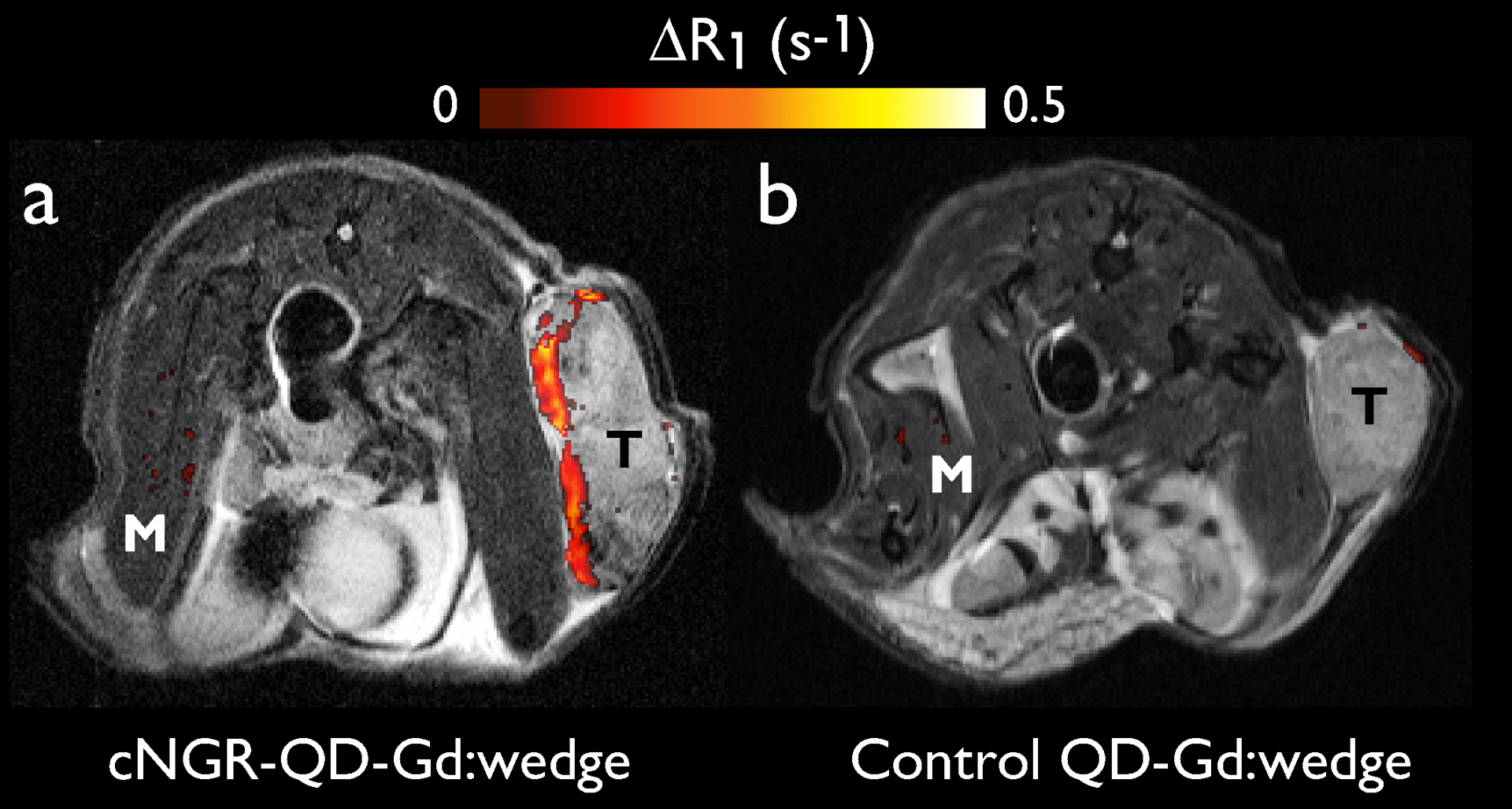 The objective of this study was to develop and apply cyclic Asn-Gly-Arg (cNGR)-labeled paramagnetic quantum dots (cNGR-pQDs) for the noninvasive assessment of tumor angiogenic activity using quantitative in vivo molecular magnetic resonance imaging (MRI). cNGR was previously shown to colocalize with CD13, an aminopeptidase that is highly overexpressed on angiogenic tumor endothelium. Because angiogenesis is important for tumor growth and metastatization, its in vivo detection and quantification may allow objective diagnosis of tumor status and evaluation of treatment response. I.v. injection of cNGR-pQDs in tumor-bearing mice resulted in increased quantitative contrast, comprising increased longitudinal relaxation rate and decreased proton visibility, in the tumor rim but not in tumor core or muscle tissue. This showed that cNGR-pQDs allow in vivo quantification and accurate localization of angiogenic activity. MRI results were validated using ex vivo two-photon laser scanning microscopy (TPLSM), which showed that cNGR-pQDs were primarily located on the surface of tumor endothelial cells and to a lesser extent in the vessel lumen. In contrast, unlabeled pQDs were not or only sparsely detected with both MRI and TPLSM, supporting a high specificity of cNGR-pQDs for angiogenic tumor vasculature.

Figure: Anatomical MR images with overlay of calculated ΔR1(s-1) for mice injected with a) cNGR-QD-Gd:wedge or b) control QD-Gd:wedge. T: Tumor, M: Muscle. 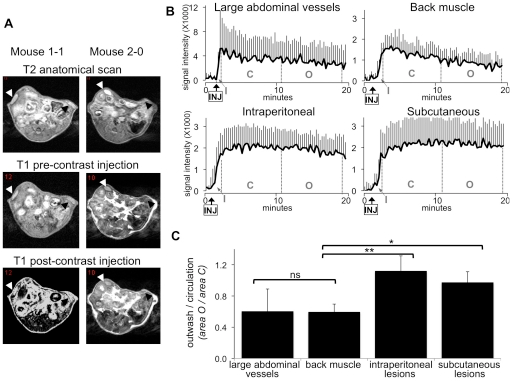 Endometriosis is defined as the presence of endometrial tissue outside the uterus. It affects 10-15% of women during reproductive age and has a big personal and social impact due to chronic pelvic pain, subfertility, loss of work-hours and medical costs. Such conditions are exacerbated by the fact that the correct diagnosis is made as late as 8-11 years after symptom presentation. This is due to the lack of diagnostic test and the fact that the reference diagnostic standard is laparoscopy (invasive, expensive and not without risks). High-molecular weight gadofosveset-trisodium is used as contrast agent in Magnetic Resonance Imaging (MRI). Since it extravasates from hyperpermeable vessels more easily than from mature blood vessels, this contrast agent detects angiogenesis efficiently. Endometriosis has high angiogenic activity. Therefore, we have tested the possibility to detect endometriosis non-invasively using Dynamic Contrast-Enhanced MRI (DCE-MRI) and gadofosveset-trisodium as a contrast agent in a mouse model. Endometriotic lesions were surgically induced in nine mice by autologous transplantation. Three weeks after lesion induction, mice were scanned by DCE-MRI. Dynamic image analysis showed that the rates of uptake (inwash), persistence and outwash of the contrast agent were different between endometriosis and control tissues (large blood vessels and back muscle). Due to the extensive angiogenesis in induced lesions, the contrast agent persisted longer in endometriotic than control tissues, thus enhancing the MRI signal intensity. DCE-MRI was repeated five weeks after lesion induction, and contrast enhancement was similar to that observed three weeks after endometriosis induction. The endothelial-cell marker CD31 and the pericyte marker α-smooth-muscle-actin (mature vessels) were detected with immunohistochemistry and confirmed that endometriotic lesions had significantly higher prevalence of new vessels (CD31 only positive) than the uterus and control tissues. The diagnostic value of gadofosveset-trisodium to detect endometriosis should be tested in human settings. 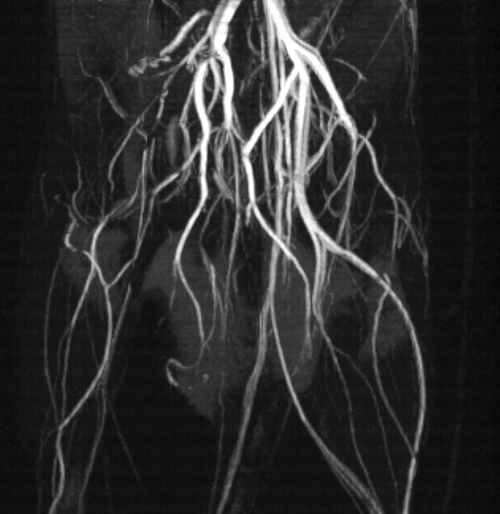 Purpose: To automatically analyze the time course of collateralization in a rat hindlimb ischemia model based on signal intensity distribution (SID).

Materials and Methods: Time-of-flight magnetic resonance angiograms (TOF-MRA) were acquired in eight rats at 2, 7, and 21 days after unilateral femoral artery ligation. Analysis was performed on maximum intensity projections filtered with multiscale vessel enhancement filter. Differences in SID between ligated limb and a reference region were monitored over time and compared to manual collateral artery identification.

Results: The differences in SID correlated well with the number of collateral arteries found with manual quantification. The time courses of ultrasmall (diameter ≪0.5 mm) and small (diameter ≈0.5 mm) collateral artery development could be differentiated, revealing that maturation of the collaterals and enlargement of their feeding arteries occurred mainly after the first week postligation.

Conclusion: SID analysis performed on axial maximum intensity projections is easy to implement, fast, and objective and provides more insight in the time course of arteriogenesis than manual identification. 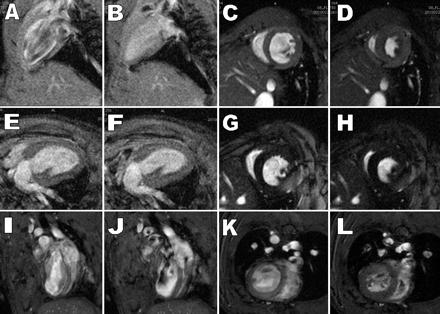 MRI has been proven to be an accurate method for noninvasive assessment of cardiac function. One of the
current limitations of cardiac MRI is that it is time consuming. Therefore, various geometrical models are used, which can reduce scan and postprocessing time. It is unclear how appropriate their use is in rodents. Left ventricular (LV) volumes and ejection fraction (EF) were quantified based on 7.0 Tesla cine-MRI in 12 wild-type (WT) mice, 12 adipose triglyceride lipase knockout (ATGL(-/-)) mice (model of impaired cardiac function), and 11 rats in which we induced cardiac ischemia. The LV volumes and function were either assessed with parallel short-axis slices covering the full volume of the left ventricle (FV, gold standard) or with various geometrical models [modified Simpson rule (SR), biplane ellipsoid (BP), hemisphere cylinder (HC), single-plane ellipsoid (SP), and modified Teichholz Formula (TF)]. Reproducibility of the different models was tested and results were correlated with the gold standard (FV). All models and the FV data set provided reproducible results for the LV volumes and EF, with interclass correlation coefficients ≥0.87. All models significantly over- or underestimated EF, except for SR. Good correlation was found for all volumes and EF for the SR model compared with the FV data set (R(2) ranged between 0.59-0.95 for all parameters). The HC model and BP model also predicted EF well (R(2) ≥ 0.85), although proved to be less useful for quantitative analysis. The SP and TF models correlated poorly with the FV data set (R(2) ≥ 0.45 for EF and R(2) ≥ 0.29 for EF, respectively). For the reduction in acquisition and postprocessing time, only the SR model proved to be a valuable method for calculating LV volumes, stroke volume, and EF.

Figure: Long axis (LA), 4-chamber view (4CH), and short axis (SA) images of adipose triglyceride lipase knockout mice (ATGL−/−) and wild-type (WT) mice and a rat model of myocardial infarction. Depicted are the LA-plane images of the WT mice. A: in diastole. B: in systole. E: LA-plane image in diastole of a ATGL−/− mice. F: LA-plane image in a ATGL−/− mice in systole. Here a plane through the mitral valve and the apex was chosen to assess left ventricular (LV) length and volume. I: 4CH view is depicted of a rat heart in diastole. J: 4CH view of a rat heart in diastole, after myocardial infarction. C and D: SA images are depicted in wild-type (WT) mice. G and H: SA images are depicted of a ATGL−/− mice. K and L: SA images are depicted of a rat heart after myocardial infarction in diastole and systole, respectively. SA view was positioned perpendicular to the LA plane and 4CH view for the quantification of LV volumes. Furthermore, in these images an impaired systolic contraction and a dilated and thickened ventricular wall is visible in the ATGL−/− mice (middle), as well as an infracted area in the left ventricle and slight dilatation of the rat heart (bottom).